Dr. James Felix, a family doctor, developed a series of 9 sessions offered each semester to help students understand and cope more effectively with their ADHD. The first 4 are psycho-educational sessions and the latter 5 are CBT based, specific to ADHD patients. Mindfulness techniques are incorporated throughout the sessions. The sessions incorporate content from the following 3 resources:

For more information about the ADHD workshops, check out our webinars.

“I learned so many skills and tricks to help me get organized. The group really helped me improve my academic work. ”

From 2013 and up to April 2014, there was an average of 5 referrals monthly for psychiatric consultations for the diagnosis of ADHD. Our family doctors received 5 CME lectures about the treatment of ADHD by April 2014. During the discussions around our new pit appointments, the case was made that family doctors often prescribe for illnesses (e.g. inhalers for asthma) without a specialist’s input and ADHD need not be any different. Since May 2014, the average number of psychiatric referrals for ADHD has been reduced to one per month and are typically handled in pit appointments. 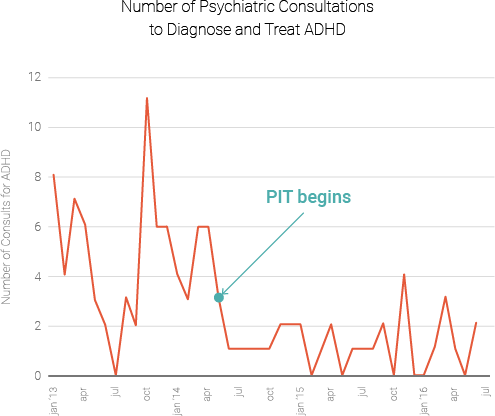 Funding for this initiative was provided by the Specialist Services Committee (SSC), one of four joint collaborative committees representing a partnership of Doctors of BC and the Ministry of Health.
Island Health, University of Victoria’s Health Services and School of Health Information Science also supported this project with contributions in kind.